In this article, we will tell you more about Google search result patterns and how they evolved over time.

Do you ever wonder what's going on inside their head? Oh, wait! Wrong beginning. Let’s try again but with some context this time around. Remember how you used to avoid Google’s Ads in your search results list by just ignoring it? It was easy because of the clear visual difference between “normal” search results and ad search results. Guess what? It’s not that easy anymore and there are a lot of obstacles on your way to “ad-free” search results consumption.

First of all, advertising isn’t a bad thing. After all, Google is a company that makes most of its revenue from advertising. And for business, it’s a way to promote their goods or services (ad campaign running experience could be improved though). But for the majority of users, ads are something that annoys, and “banner blindness” is a common phenomenon. For those users (including me), the ad section in search results is the least relevant part of it. Companies paid to show up in there, everyone can do this, unlike earning the first places in the algorithmic search results.

One of the latest search results redesigns made the ads section nearly identical to regular results. New “Ad” favicons organically blend with other favicons creating visual noise, making it much harder to see through.

The decision to place favicons in the same slot with the Ad label creates a situation where users can’t see the difference without concentrating and spending extra time. Having to wade through visual noise is not an improvement of user experience, but it’s an improvement for Google! What is this “improvement”? For example, increased Ad’s density, now they can be scattered around the page and you won't even notice that without showing some effort.

We all miss the times where the paid advertisements were separated from the rest of the search results by different background color and actual divider. The current situation looks like a major hit for the readability of the user interface.

The visual history of ad labeling

As far, the year 2013 was the last when we saw the Google Ad section done right according to best UX/UI practices. Distinctive and unique for search results background color, section divider, and “sponsored links” notification at the top right corner. It’s readable, and while not particularly beautiful, users were always aware of paid content. 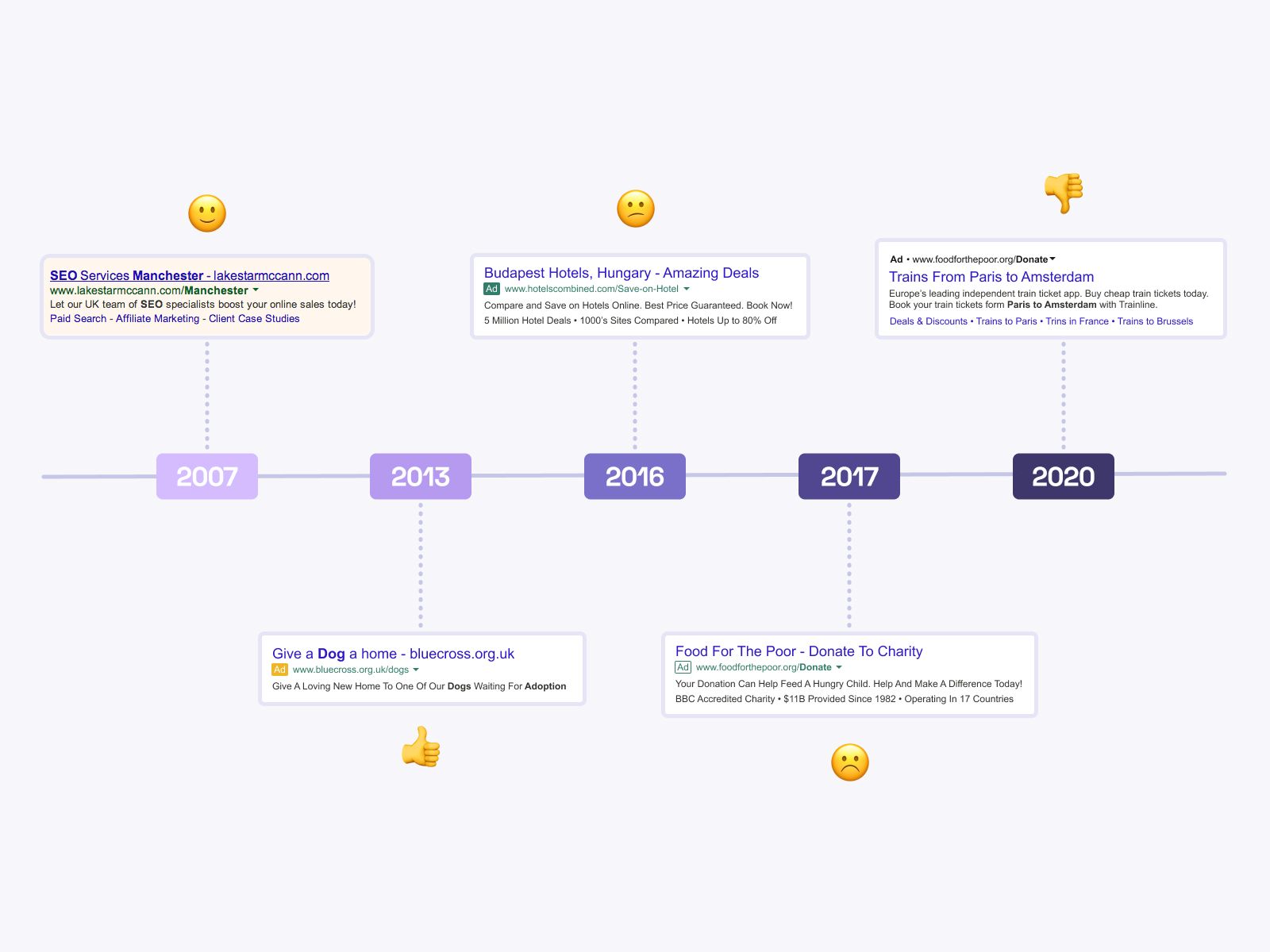 To see those steps in the direction of hidden advertising from Google is disturbing, to say the least. Legally, Google is on the brink of meeting all the minimum ad content requirements, but clearly taking steps to confuse its users. While enjoying surfing the web during all those years and not paying particular attention to all those changes, we find ourselves in a situation where the technology giant controls what we see and how we perceive it more deeply than it should be. For me, it’s safe to say that paradigm of thoughts and vision in modern Google has stepped aside a lot from what Brin and Page (founders) envisioned.

So, do you ever wonder what's going on inside their head? Now you know, the executives of the tech giant prefer to create conditions where the monetization of search is a higher priority than the creation of an unbiased search engine for its users.

I’m a tech freak...I mean geek. Video games and sci-fi aficionado. I love talking with people, eat breakfast at 12 pm, and watch IMDb movies with a 7+ (-_-’)

I’m a tech freak...I mean geek. Video games and sci-fi aficionado. I love talking with people, eat breakfast at 12 pm, and watch IMDb movies with a 7+ (-_-’)

Landing page or corporate website? Today we explain when a landing page works best, and when it doesn't.

Landing page or corporate website? Today we explain when a landing page works best, and when it doesn't.

Meet our hero and the future of the websites - JAMstack. So, little dev talks are here.

Why SEO Is Important: Case Study

“Why I need SEO?” - already had that question? Here is a comprehensive case study that shows the importance of SEO.

Stop thinking of something when you can have it! Contact us now and make a rocket out of your website.

OR SEND US A NOTE VIA EMAIL